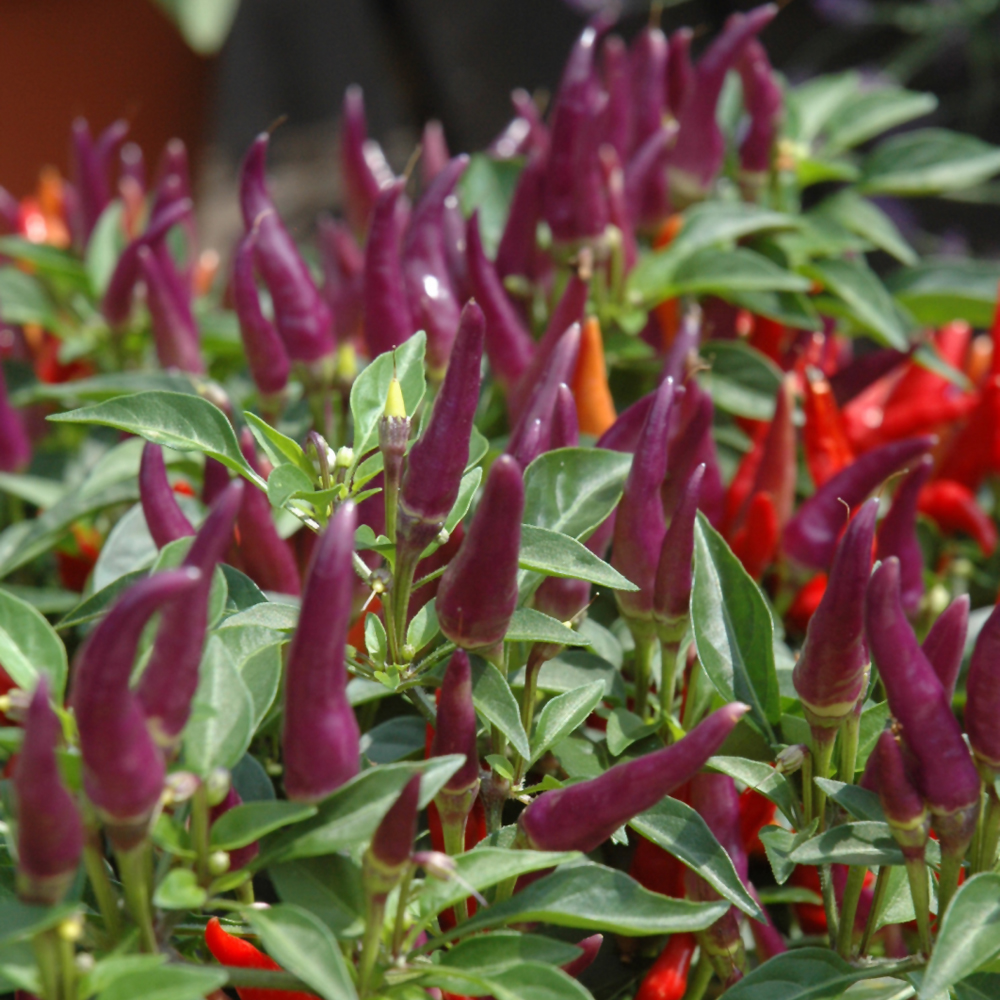 A stunning ornamental pepper, featuring narrow upright peppers that point upwards for maximum display, colors range from red, orange, and purple, often all at the same time, fruits eventually mature to red, great for fiery color in the garden or container

Sangria Ornamental Pepper is an herbaceous annual with an upright spreading habit of growth. Its medium texture blends into the garden, but can always be balanced by a couple of finer or coarser plants for an effective composition.

This plant will require occasional maintenance and upkeep, and should not require much pruning, except when necessary, such as to remove dieback. Deer don't particularly care for this plant and will usually leave it alone in favor of tastier treats. It has no significant negative characteristics.

Sangria Ornamental Pepper is recommended for the following landscape applications,

Sangria Ornamental Pepper is primarily grown for its highly ornamental fruit. The fruits are showy purple peppers with orange overtones and which fade to red over time, which are carried in abundance from mid summer to early fall. It features subtle white star-shaped flowers dangling from the stems from late spring to mid summer. Its narrow leaves remain dark green in color throughout the season.

This plant is primarily grown as an ornamental, but it's also valued for its edible qualities. The oblong spicy peppers are most often used in the following ways:

Sangria Ornamental Pepper will grow to be about 16 inches tall at maturity, with a spread of 18 inches. This vegetable plant is an annual, which means that it will grow for one season in your garden and then die after producing a crop.

This plant should only be grown in full sunlight. It is very adaptable to both dry and moist growing conditions, but will not tolerate any standing water. It is not particular as to soil type or pH. It is somewhat tolerant of urban pollution. This is a selected variety of a species not originally from North America. It can be propagated by cuttings, however, as a cultivated variety, be aware that it may be subject to certain restrictions or prohibitions on propagation.

Sangria Ornamental Pepper is a fine choice for the garden, but it is also a good selection for planting in outdoor containers and hanging baskets. It is often used as a 'filler' in the 'spiller-thriller-filler' container combination, providing a mass of flowers against which the larger thriller plants stand out. Note that when growing plants in outdoor containers and baskets, they may require more frequent waterings than they would in the yard or garden.